Reflections on my two years at SEEDIG 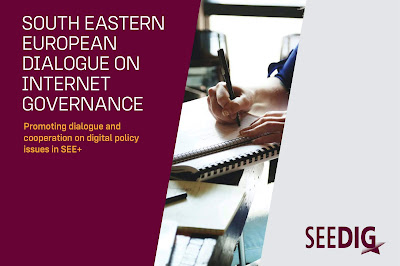 Two years ago, in November 2017, I was elected as a member of the executive committee of the South-Eastern European Dialogue on Internet Governance (SEEDIG).

My mandate at SEEDIG began with the preparation of the SEEDIG plan, expansion of the network of partners and sponsors, and with preparations for the annual meeting that took place in Ljubljana, Slovenia, in 2018. The meeting was held under the honorary patronage of the President of the National Assembly of the Republic of Slovenia Dr Milan Brglez (now a member of the European Parliament) and supported by over 30 organisations. There were one-third more partner organisations than a year before and four times more local sponsors.

My mandate continued with the executive team retreat and the SEEDIG 2019 annual meeting cycle. I worked primarily on the organisation and coordination of the programme committee, which produced an outstanding programme that attracted more participants than in previous SEEDIG meetings and delivered strong messages.

The executive team has been proficient in organising annual meetings. It has also intensified intersessional work that led to the establishment of an inner circle of SEEDIG loyal supporters (currently amounting to around 30 persons).

It was less successful in building trust and mobilising the wider community. It has not paid enough attention to promoting values of openness and candour, tolerance of dissent, and to building good governance, which are all important for long-term success.

Personally, I am disappointed that the executive committee has not reached a consensus on governance issues, although proposals were tabled for discussion.

Instead of promoting common values and fair processes for regional stakeholder participation, SEEDIG has become overly reliant on international and global stakeholders.

However, SEEDIG’s excessive reliance on partners outside of the region has somehow led to a vicious circle and stagnation at best, and it shows a significant lack of engagement with diverse regional stakeholders. Unfortunately, it also reveals a lack of understanding of the broader, complex, regional socio-economic and political context(s), and above all, an absence of understanding of fair processes which are characterised by inclusion, balance, and accountability — within the region.

After five years, SEEDIG is still struggling with finances and building regional partnerships. Until now, it was only in North Macedonia and Slovenia that events could have been organised without substantial support from international or global sponsors with headquarters outside South-Eastern Europe.

SEEDIG is also struggling with attracting participants and stakeholders from the whole region to attend its annual meetings. Events organised across the region that expands from Slovenia to Georgia — connecting South-Eastern European and Eastern Partnership countries — are mostly inaccessible to civil society, small and medium enterprises, and start-ups from the region at large. Apart from the local community, key participants are predominantly institutional stakeholders with high stakes and those community members from the region, sponsored by international or global stakeholders in one or another way. This undermines the legitimacy of SEEDIG-led regional dialogue on internet governance.

Participants at SEEDIG annual meeting are a rather closed community — a so called internet governance nomenclature — despite the fact that calls for participation are announced publicly. Often, key participants at SEEDIG also have key roles in other national and global internet governance events and processes as well as in (supporting) organisations.

SEEDIG is still in a fragile stage. It has a rather small membership with a loyal inner circle and weak ties with national communities and regional stakeholders. It is not rare that its discussions, activities, and even decisions are driven by the inner circle, but presented as community decisions.

Being heard at SEEDIG, even if you are an insider, is hard to achieve. If one’s suggestion or opinion is not in line with or does not reflect (some) already anticipated objectives, which are not public (or not even shared with the entire executive team), it is often silenced in the process. Likewise, dissenting views are suppressed or self-censored.

At this point, the key question for SEEDIG is how to ensure that its processes are open, fair, and not captured by anyone (i.e. that no one has exclusivity over them)? The answer lies in the principles of true inclusion, true balance, and accountability.

Accountability means that community members and stakeholders who participate in crafting SEEDIG rules, standards, and principles must be transparent and deserving of our trust.

In my previous similar roles, the teams paid significant attention to accountability, good decision making, and managing conflict of interest. This is always a challenge, especially in the region that is still developing the virtues of good governance. At SEEDIG, regrettably, the importance of good governance was deliberately diminished.

When dealing with the legal entity, SEEDIG has failed to meet the basic principles of good decision making and accountability. In the previous mandate, one or two members left the executive team over the issue of legal entity, with no written evidence of decisions made in this regard. The issue surfaced again in the current mandate. This fact reaffirms that conflicts cannot be resolved solely by bringing in new people, but by better and wider communication and better governance.

Since 2014, three executive committee members have resigned and two members, whose mandate expires this year, are not running for a second term. At least five out of eight members have not felt comfortable working in the executive team or expressed disagreement with the way SEEDIG has been led.

I deeply regret to see how the process of establishing the legal entity is being determined and manipulated. I wish to publicly express my disagreement with this process.

Decisions around the formation of the SEEDIG Legal Entity Working Group were not made in an open and transparent manner, which undermined the trust into leadership.

At SEEDIG, we are all colleagues and friends. However, when it comes to decision making and respecting the principles of good governance and accountability, we should act independently and responsibly. Yet, members of the community who represent stakeholders, especially those with high stakes in internet governance, cannot be considered as independent of the stakeholders they belong to.

In the Slovenian internet governance community, it would be unthinkable that stakeholders with high stakes, coming even from outside the country and being, at the same time, the biggest sponsors, took over such a delicate task of preparing the local association's founding acts. Such an attempt would be rejected as entirely unacceptable. Moreover, it would also be against the rules governing conflict of interest.

It has to be acknowledged that after 2017 trust in the executive committee was broken again over the issue of legal entity. This fact cannot be ignored. Besides, it cannot be simply resolved by a majority vote or by transferring the responsibility from the executive committee to the working group, led by stakeholders from outside the region and/or those in conflict of interest. This truly is a wrong way of dealing with lost trust, and the situation has been worsened by recent developments.

We should reinforce the SEEDIG culture and values, promote openness, transparency, and good governance, which has been a continuous challenge for the executive committee in different compositions throughout the years.

The executive committee or any member of it should refrain from making any decisions granting benefits or recommendations to members of the inner circle in relation to financial support or participation in other internet governance processes or organisations.

In discussions about the legal entity, we should strive for genuinely multistakeholder collaboration, based on bottom-up, open, and fair participation of all stakeholders, but above all, for a space that would truly reflect our culturally rich as well as economically and politically challenging region.

We should not sacrifice our values for personal gains nor for interests of any stakeholder. The legal entity should be established on the grounds of unrestricted freedom of association, preventing that any individual, the inner circle, or any stakeholder captures the association or forms a private club. On the same principles, it should also be prevented that stakeholders with high stakes shape the founding documents and governing rules. This is a matter of good governance, organisation’s sovereignty, and trust among the stakeholders and national internet governance communities in the region.

We should work hard on retaining the current community, and we should tackle an even bigger challenge of reinforcing the ties with national internet governance communities and expanding the network with new partners from the whole region.

We should bring back trust, collaboration, and openness to our community. However, if the issues of governance and sovereignty were not properly addressed, trust into SEEDIG would be gravely undermined throughout the region. National internet governance communities and regional stakeholders might refrain from further participation in the SEEDIG-led regional dialogue on internet governance or even establish new regional initiatives.